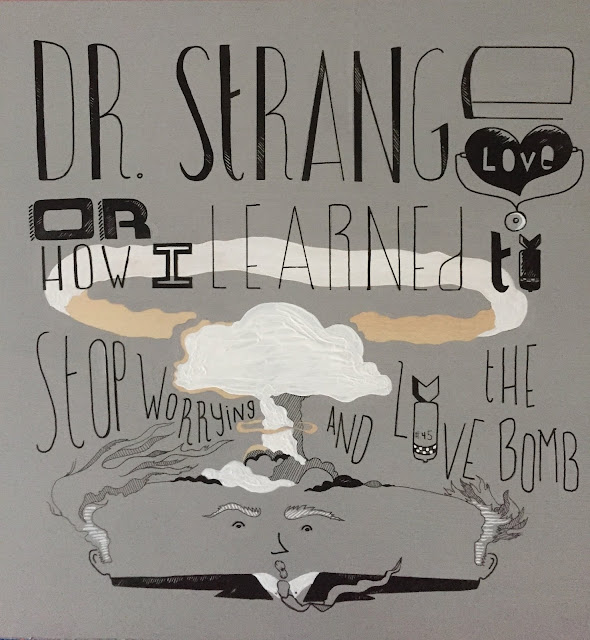 The opening reception for the 100 Film's Show at Green Bench Brewing in St. Pete, FL is tonight from 7-11 PM. The art show was rescheduled from last week due to bad weather.  Should be a gorgeous night for the event.  Showcasing the work from 100 artists who submitted work samples, were accepted to participate, given a list of 300 films to pick from, we all received the same 1ft square wood panel to render their work upon.  This is my first time participating in this event or any show curated by Chad Mize.  Decided to challenge myself and stay away from repeating subject matter like Lord of the Rings or Star Wars and chose the oddly relevant again Cold War film directed by Stanley Kubrick.  Can you guess which one?

"Dr Strangelove, Or: How I Learned to Stop Worrying and Love the Bomb" for a black and white film released in 1964 the themes at play have been revived by our current political climate.  Themes rearing their ugly heads again like the tension of a shooting war between Russia and United States, atomic era brinkmanship, espionage, jingoism and school yard style squabbles between immature leaders that hold the fate of the planet hostage.  For anyone up for watching a classic, check it out. You will hopefully enjoy and be slightly frightened by both the parallels and how little we have truly advanced in the fifty-four years since then.  Peter Sellers is a comic genius in the film playing three different characters including the President, a former Nazi scientist and a British Officer of the Royal Air Force.

Hope to see you out at the show tonight, the final image has a twitter bird icon on each of the bombs. Symbolic of the damage that can be wrought on many levels from both the physical and digital bombs launched by our current, "stable genius" President Number 45.  Acrylic paint and ink on wood, sealed with a UV protector top coat.  Happy Friday to everyone out there. 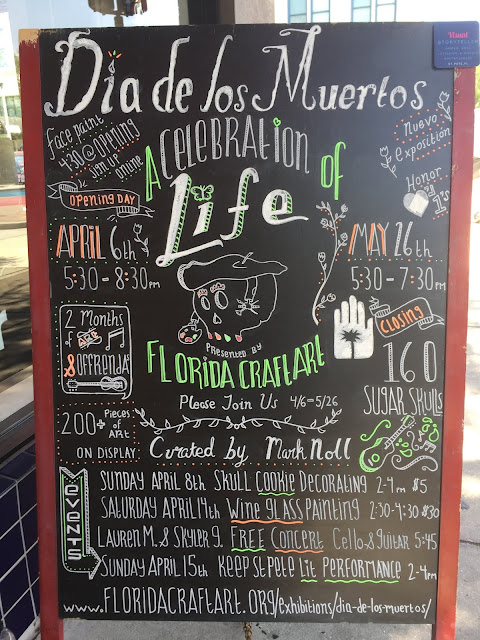 Freshly done chalkboard signs for a new client in Florida CraftArt Gallery to help promote their nuevo exposition, or newest exhibit.  Check out the opening event 4/6 from 5:30-8:30pm tonight in St. Pete, FL.  This show was curated by Mark Noll and includes 200 plus pieces of art, with one hundred and sixty sugar skulls on display.  Each work of art tells a story and is part of the offrenda, or tribute, paying respects to the 3,000 year old Aztec tradition of remembering the dead not with grief but with a celebration of life.  Two months of events are planned around this central theme, closing night on 5/26. To find out more info and sign up for events like opening night face painting use this link to FLCraftArt.

My skull is paper mounted to wood, a watercolor painting meets and ink drawing, entitled "Son's of Medellin" it is a tribute to my SCAD professor who passed away, George Alvarez.  And to Andres Escobar, a professional soccer player with over 250 games played, appeared for his country 51 times, the Captain of Columbia's National Team during the 1994 World Cup, nicknamed, The Gentleman. Best known for his quote, "Life does not end here."

More on breathing new life into their stories in a previous post from March. Sign art done with Liquid Chalk Markers, got these at Whimsodoodle my new favorite art supply store right in downtown, St Pete off 2nd Ave South.  Super excited about having art in another gallery show and to help take FL CraftArt's sidewalk signs to a new level.  Did a preliminary drawing with a white chalk pastel pencil, this is the most info I've even been asked to include in a sign. But definitely a fun hand-lettering challenge. Hope to see out at there this weekend. Cheers. 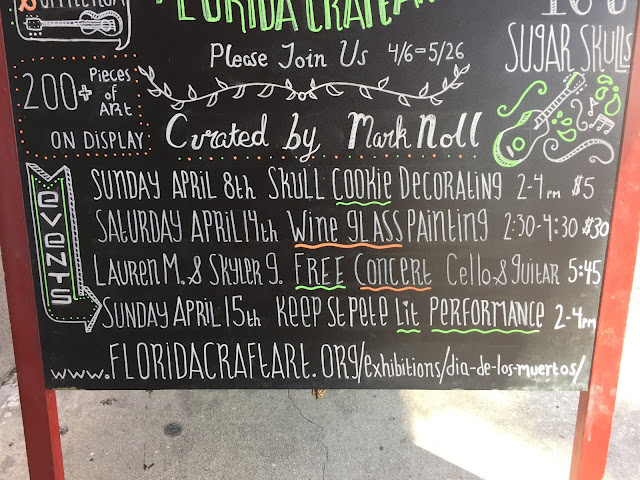 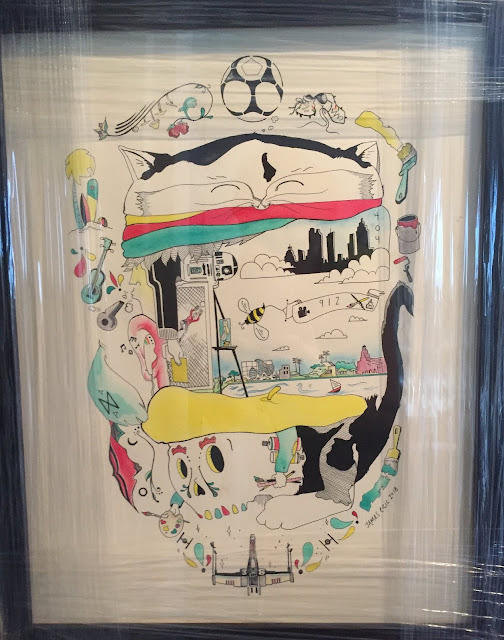 Here is my entry in the upcoming self-portrait exhibition, Look At Me, at the Iberian Rooster on April 7th.  The show has been curated by Diana Bryson and I'm excited my art was accepted to be part of the experience.  The work is inspired by the recent Day of the Dead entry, "Son's of Medellin" and San Fransisco Artist Jeremy Fish's conceptual and graphic illustration style. Done with pen and ink, watercolors and gauche.

All the area codes of places I've lived are featured along with skylines of Atlanta, GA and St. Pete, FL.  Come out to the show and I will be happy to explain the symbolism and allegory in person.  The piece is titled, "Art Nerd Life" and is an effort to essentially show what makes me up in a visual nutshell,  as opposed to the classical portrait of my external self.
Posted by James Eric at Sunday, April 01, 2018 No comments:

And welcome to our online home for art in raw and finished forms, paintings and ramblings. Long may the passion for the arts last. Having grown up together in Atlanta, GA both Mike Lancette and James Eric have been questing to master their craft.
Creating art rooted in traditional drawing and painting with a strong influence from sequential, comic style art and graphics. Both artists are open to commissions. We hope you discover, enjoy and in turn become inspired.