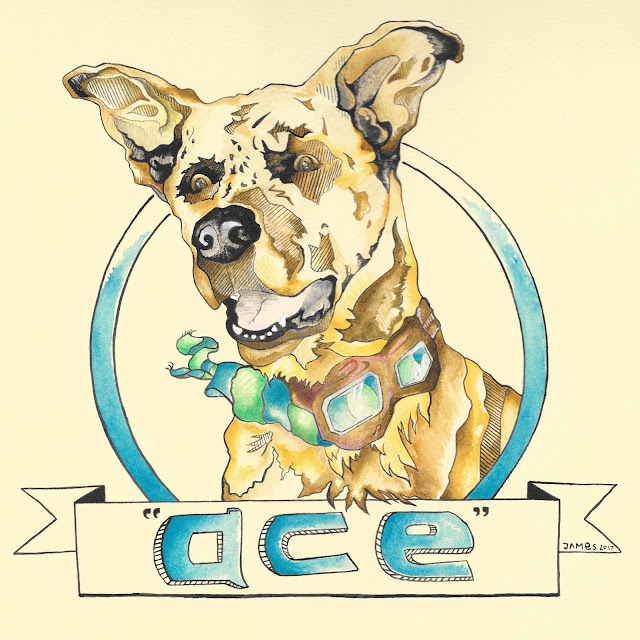 Do you love your pet like family? Then consider commissioning a pet portrait, which can make great gifts for others or treat yourself. This is a scaled down version of the 11 by 13 inch original made with pencils, acrylic paint, watercolor cakes, FW inks and watercolor pencils on Arches Paper.  Enjoyed getting back to making animal art with a fun project where I got to meet the owners of this local business and their beloved dog/mascot Ace.

The original art has been purchased and the image will be used for a small sized, 5 by 5 inch sticker, on the bumper of an epic '59 Caddy, company car at Chris Field's gym, Studio Physique. Located at 3100 22nd Avenue North in Saint Petersburg, Florida. Updates to follow on this one when the sticker is applied.
Posted by James Eric at Tuesday, January 31, 2017 No comments:

Believe it or not, it does get cold in Florida. Especially when you add in the wind.  Right now Zaytoon Grill is putting out one of their seasonal offerings that will warm your bones, an orange Lentil Soup.  The soup is so good it inspired a new batch of lettering for their sidewalk sign. Chalk art done with nu-pastels, pastel pencils and love.
Posted by James Eric at Saturday, January 07, 2017 No comments:

If the sketchbook could talk it would say, "Greetings from Morrow Bay, California." As promised here are sketches from a recent trip up the Pacific Coastal Highway.  This drawing is of a panoramic view from Los Osos Valley looking towards Morrow Bay. The large outcrop in the middle of the bay there is Morrow Rock, actually a volcanic vent plug which formed thousands of years ago.

Once blasted and mined, the site is now serves a totally different purpose. As protected park land, a popular surf spot, and as educational resource to learning about the many species of wildlife living in or migrating through the area. Imagine you are looking left to right across the bay and valley to get the most out of these two connected landscapes.

Swimming in the waters were otter twice as big as their east-coast, river-dwelling, cousins.  And sharing in the same space or hunting ground were the ever curious seals, popping up like wet dogs with massive whiskers. I had never seen many of the creatures spotted during this trip in the wild before. Many birds, the most rare being the elusive peregrine falcon, nest among the sci-fi-looking rocks and peaks of beautiful Morrow Rock; which appears to change colors during different times of day.

If you're ever in and around the Santa Barbara area and fancy a road trip.  Then check out the village of Morrow Bay which is only an hour and a half drive north, bring some binoculars or a good telephoto lens. If you time the seasons right and feel adventurous you can even kayak out to watch migrating whales.
Posted by James Eric at Tuesday, January 03, 2017 No comments: 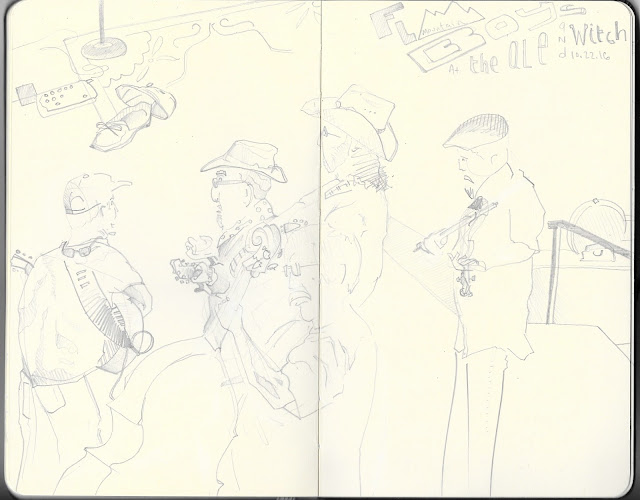 Hopefully all of you out there have had a good Holiday season and best wishes from me for a Happy, Healthy New Year in 2017. Music is in the air.

A pencil sketch of a local bluegrass band, The Florida Mountain Boys playing in an outdoor courtyard setting at the Ale and Witch Pub a few months back.

More drawings and posts to come in the coming months including some from recent travels to California. Peace and Love.
Posted by James Eric at Sunday, January 01, 2017 No comments:

And welcome to our online home for art in raw and finished forms, paintings and ramblings. Long may the passion for the arts last. Having grown up together in Atlanta, GA both Mike Lancette and James Eric have been questing to master their craft.
Creating art rooted in traditional drawing and painting with a strong influence from sequential, comic style art and graphics. Both artists are open to commissions. We hope you discover, enjoy and in turn become inspired.